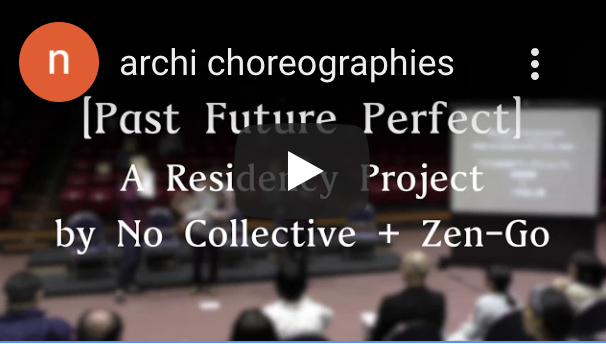 RELATED COURSE
Archi-Choreographies (2021 - )
RELATED RESEARCH
Material Bias
Influence of Influence
Staging of Experience
In February 2018, I went to an artist residency in Kinosaki, Japan with the choreographer Megumi Kamimura and performance/film maker Shinichi Takashima. This was around the time I was thinking about bias of electronic circuits in my research on David Tudor, and since the topic of bias and dance were simultaneously on my mind, I began thinking how the notion of bias in electronic circuits might be applied to the human body. Being in Japan, I first considered how I might translate the word "bias" into Japanese. And I noticed that there isn’t a good word that encompasses all the nuances and connotations that "bias" has in English. Then it occurred to me that a specific word in Japanese that is usually not used to translate bias might nevertheless work as a good translation. That word is kuse, which is usually translated as "habit," but has a wider meaning and application that really has no translation in English. For instance, kuse is used for neguse, which means the messy hair that you have when you wake up—a bed head. Now that is something that the concept of habit in English does not usually encompass. And when you take a bed head as the model, you see that kuse names any kind of bias that became inscribed in your mind or body as a result of some kind of interaction with the world, whether it’s between your head and your bed, or between you and people you hang out with, who in many cases influence the way you speak or gesture or think, and so on.

Because I was on a dance residency, I began to see kuse as a form of unconscious but primordial choreography that is imposed upon one’s movement and behavior, a form of dance that one is dancing without knowing it. And during the residency we organized a series of workshops where participants would focus on each other’s kuse to identify this personal choreography and try to do something with it, like transposing it to others, or overwriting it with some other kuse, and so on. Instead of making dance by creating new movements and adding new choreography, this was a way to discover dance and transform it through subtraction.

I now teach a class at the University of Tokyo on Archi-choreography, which is how I named it. And with my students, I am currently planning to document our approach and findings in the form of a book.